The Craftsmen of the Costa Smeralda

The people behind the scenes

With this article we intend to continue the story printed in our last edition which told of the interior decorator Laurette Thiennaut and her daughter Veronique, to mention now other artisans who have contributed to the birth and development of the Costa Smeralda. It is largely thanks to their ability and taste that the area has become beautiful and well known in the whole world, but they themselves have often not received the acclaim which they merited. And it is just that which we would like to correct, bringing them and their contribution into the open.

We begin with a man who had been given the task of excavating with dynamite the granite rock to form the foundations on which the village of Porto Cervo and the great hotels of the Costa Smeralda are built, "Uncle" Marongiu.

But rightly, you might well ask, is he an artist? We have to answer yes, because he had reached a technical perfection in his work, succeeding for instance in exploding mines in the basements of the Porto Cervo square so as to enlargen the space of what was then the S’inferru dicotheque (now the ISOLA shop) without in any way damaging the adjacent and overhead buildings. "Uncle" Marongiu lives now on his pension in the nearby village of San Pantaleo and in spite of the health problems of most elderly people, he has never lost his captivating smile, cheering up everyone at the outdoor feasts, which he never fails to attend. 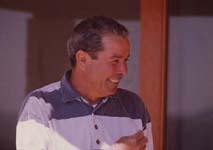 Giuseppe Frontello is a small building contractor who has contributed in more ways than one towards the creation of the Costa Smeralda. The red brick paving of the main passage in the village of Porto Cervo is one of his least known works and yet we pass over it every day. “Pinuccio”, the nick-name used by his friends, has been engaged in the creation of far more important constructions, such as various beautiful villas on the Pevero Golf, or the conversion of the old discotheque “La Contra” at Liscia di Vacca, transformed into five magnificent houses, three of them projected by the architect Savin Couelle and two by Jean Claude Lesuisse.

Savin Couelle chose Frontello to produce the show room for the Cala di Volpe Hotel and for the reconstruction of the barbecue, as required by the ITT-Sheraton organisation, showing his faith in the skill of this outstanding craftsman. He had also been entrusted with the installation of the Aga Khan’s private offices above the piazza near the Hotel Cervo. After working for many years on the Costa Smeralda, Frontello has acquired an exceptional sensibility which enables him to work in perfect harmony with the best of architects. We have often seen him, proceeding instinctively at his task, to be followed by full approval and satisfaction of the architect.

The Frontellos are a hard-working family; the two daughters, Alessandra and Sabina, have recently taken over very successfully and showing excellent professional skill, the running of the “La Briciola” restaurant at Liscia di Vacca, whereas signora Assunta, in line with Sardinian tradition, looks after the finances of the two family activities.

And now we would like to mention someone who produces beautiful things to embellish beautiful houses, and not only on the Costa Smeralda since much is sold to be installed in city houses. 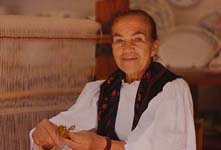 The lady in question is Signora Rachele Loche, whom you must surely have noticed as she moves through the Porto Cervo village, clothed in the typical dress of her native village of Tonara. Her shop of craftsmanship products is situated in a passage in the centre of the village and she can be seen there at work on her ancient loom. There are not many villas which haven’t got some of her beautiful carpets or hand embroidered cushions.

Vincenzina Pitta, a dynamic craftswoman from Alą dei Sardi, has only recently taken over a shop near the entrance of the supermarket where she keeps her valuable Sardinian materials and household linen.

She has acquired her great knowledge of this field by having worked for a long time for Signora Medioli Carini, the originator of the interior decorating enterprise Arcarosa.

Pat Steel is an English painter, who has been living for many years in a lovely little house in the nearby town of San Pantaleo, home to many of the artists of the Costa Smeralda. Her naļf paintings express all the happiness and kindness that she harbours in her heart. She is forever smiling, generous and ever willing to help anyone in need. Pat lives with her cat and her dog, in her naļf house, a family that seems to have stepped out of one of her paintings.

An art critic says of Pat: "Her works, which she herself describes with self-irony as ‘kitchen paintings’, are a masterpiece of playful understatement". She can be visited in San Pantaleo, in Via Oristano, telephone 0789-65220.