The Craftsmen of the Costa Smeralda

Continuing the story of the craftsmen and artists who have built the Costa Smeralda and contributed to its beauty, we now speak of the first three pioneers, who transformed the barren, rocky pastures into luscious gardens of Eden.

In 1958, when Mr. Giuseppe Mentasti, the San Pellegrino mineral water man, first purchased Poltu Mannu (the "Large Port", which was to become Porto Cervo) he decided to reforest the sea-shore, where today we have the "Sestante" apartments.

He engaged the young Vanni to organise everything. Poltu Mannu was then purchased by H. H. the Aga Khan, who gave it its new name.

The Aga Khan continued the reforestation project and brought over Mr. Schneider, a garden expert, who was working for him in France to set up a nursery. After a couple of years, another expert on Mediterranean gardens was sent to Sardinia, the landscape gardener and architect, Mr. Jeas Thomas. Vanni still considers Mr. Thomas his great Maestro, who still corresponds with Vanni, despite his 80 years, from Australia where he now lives. The courageous apprentice, at only 23 years of age, decides to start out on his own.

He worked a lot for the Architect Mr. Luigi Vietti, and also for the architect Giuseppe Polese and created many wonderful gardens for the large, important villas and hotels.

According to Vanni Orecchioni, a garden must not be discovered all at once, but should reveal itself a bit at a time, as one walks through it, providing one surprise after another. Visiting his gardens, one never has the impression of having seen it before, or that it resembles another, as everyone has its own very personal characteristics. 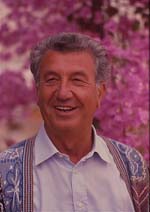 Of Venetian origin, Giuseppe Carteri was called by the Sgaravatti gardening firm in 1965 to run its new office in Porto Cervo. Since then, the young manager has had a successful career, becoming a partner in the firm.

He speaks with pride of his first attempts to tame the wild Sardinian scrub, transforming it into enchantingly cropped hedges and combed gardens, very much appreciated by the foreigners, perhaps a bit less by the Italians, who prefer the Mediterranean macchia style.

"It all began", remembers Carteri, "with the architects Michele and Giancarlo Busiri Vici, and the gardens of the Hotel Romazzino, then belonging to the Rank Organisation, but now of CIGA Hotels, of The Luxury Collection; and the first villa was that of Princess Alexandra of Kent, in Piccolo Romazzino".

The main problem in those days, was the shortage of water, an essential element for any garden. This appeared to be insurmountable, but thanks to the great promoter of the Costa Smeralda, H.H. the Aga Khan (and to the determination of the Secretary General of the Consorzio Costa Smeralda, Mr. Paolo Riccardi), the Liscia Dam was constructed, together with the aqueduct to Porto Cervo.

Because of Carteri’s experience on the Costa Smeralda, he has been charged with the creation of enchanting gardens in the desert in the Arab Emirates.

Giuseppe Carteri inherited from his family farming origins, a passion for plants, as well as for animals. At the Sgaravatti nursery on the road to Arzachena, you can visit his little fauna park, with swans, lyre birds, tropical parrots and talking black-birds, that greet you with "Ciao". It is a delight for the frequent visiting scholastic tours and Carteri reveals with satisfaction, that he personally cares for his little feathered friends.

Born in the rocky countryside just outside Arzachena, where he lives with his Texan wife Elizabeth, Sebastiano Ruzzittu has been working on the Costa Smeralda from 1972. Even as a student, studying agriculture, great was his enthusiasm, that Sebastiano would work the afternoons on someone’s garden.

Give him any rock and he will transform it into a precious stone, carefully mounted in a garden, surrounded by colourful and fragrant flowers. The architects who have sought him for his expertise with rocks, are Peter Schneck, Savin Couelle and Jean Claude Lesuisse.

It’s quite impossible to imagine just what his hands can do, given a difficult, rocky piece of land.